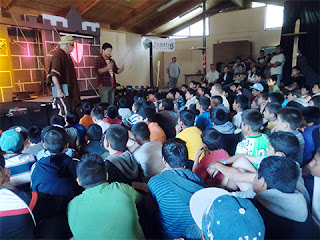 Maybe it's because speaking has been so much a part of my life that I've really never considered it to be an integral part of my "Missionary" calling in Mexico. It took this photo (top) someone took at our last camp, to realize just how important communicating is to the missionary.

I studied the photo closely and then studied several other photos of kids listening. I don't get that perspective from the front.

Camps are great and so important to the kids we work with. Camp provides a few days in which we have our kids locked into a powerful pre-prayed environment. An environment in which God can work, while the enemy is hindered. Often I have the privilege of preaching and teaching at camps, speaking to adults and teens, even these little kids. Big groups, little groups, whatever. Rewarding indeed. 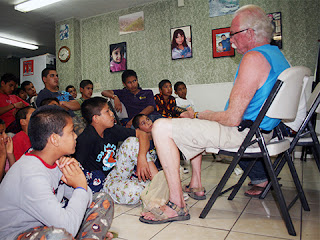 The kids above are mostly younger kids. A camp full of energetic little rascals going everywhere at once but when it comes time for God they will calm down and actually listen! Talk about miracles!

Look again, these kids, all of them, each of them are really listening. What I'm doing here is simply sowing seeds via an interesting talk.

I'll admit I do look a little weird. When I work with the kids at camp, I usually dress up in my Peruvian poncho and wear my hat from Bolivia, with a tiger tooth in the rim and I wear a Jaguar claw necklace; the kids like the exotic adventure spin.

Teens are still my favorite audience, I teach and interact with teens in Mexico on a regular bases in different orphanages; again the respect and attention these street kids give me is nothing but amazing. Ears that listen and hearts that are open are a great opportunity as well as responsibility. 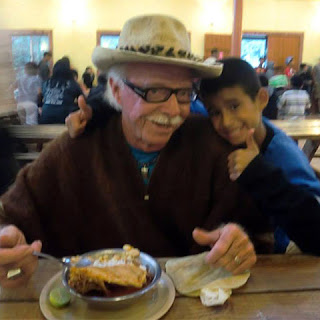 In our Spectrum Letters through these years I haven't placed much emphasis on my teaching and preaching ministry ... the speaking end; however it's a very effective part of the ministry. For fifty years I have taught in Tijuana on a regular weekly bases. Teenagers jail, Camps, Orphanages, Retreats, Clubs, Discipleship and Leadership staff meetings. (With my faithful and excellent translator, Julian)
Posted by Pastor Von at 6:00 PM 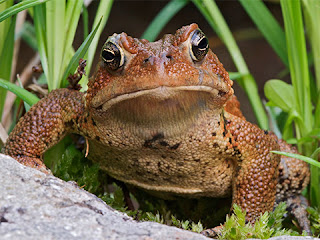 As I stared at the two flat toads on the roadway. These two were different than the other flattened toads. It was true that they were all quite dead, but there was something different about these two. Such a sad ending of a wild romance. With a bit of forensics and a little imagination, I pieced together the story.

A tropical night in Kauai, what could be more romantic? They met each other, she blinked her eyes innocently and he blinked back. It seemed to start from there. The two toads fell deeply in love. She turned around and he jumped on, and off they hopped into a dark night of love. Two lovers hopping helter-skelter in the brush, nowhere to go but love. For some reason, only known to a toad, she decided to cross the road, and so they headed hopping happily onto the warm dark roadway. In their passionate embrace they hopped right into the path of an oncoming car.

Their love was to be short lived.

There was no squealing of brakes ... just a croak, two pops and a crunch and their love was cemented to the asphalt! Alas in a split second the two were made one in the flesh! Days later, I bent down and looked closely at them ... true, they were as flat as other toads on the road, but these two were different; they were still smiling!

What a night it must have been! 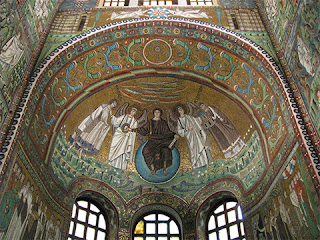 I've had this short article for most of forty years and used it often to compare the extreme difference between the conduct and behavior of early Christians, (200A.D.) and those of us today. It's not only interesting to note the differences but where the differences exist. This article addresses the question; just how important is our testimony and public conduct?

"The following statement is attributed to Aristides, a second century worldly (non-Christian) philosopher. It is his comment and observation of Christians in his day (200 A.D).

They abstain from all impurity in the hope of the recompense that is to come in another world. As for their servants or handmaids or children they persuade them to become Christians by the love they have for them and when they have become so they call them, without distinction, brothers. They do not worship strange gods and they walk in all humility and kindness and falsehood is not found among them and they love one another. When they see the stranger they bring him to their homes and rejoice over him as over a true brother. And there is among them a man that is poor and needy and if they have not an abundance of necessities they will fast two or three days that they may supply the needy with the necessary food.

They observe scrupulously the commandment of their Messiah. They live honestly and soberly as the Lord their God commanded them. Every morning and all hours on account of the goodness of God toward them they praise and laud Him and over their food and their drink they render Him thanks.

And if any righteous person of their number passes away from this world they rejoice and give thanks to God and they follow his body as though he were moving from one place to another. And when a child is born to any of them they praise God and if again it chance to die in its infancy they praise God mightily as for one who has passed through the world without sins. Such is the law of the Christians and such is their conduct. 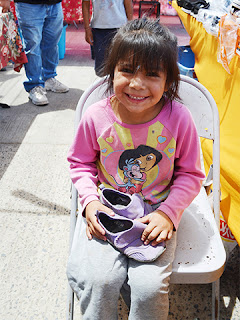 I get tired of seeing these ragged dirty little urchins running around with beat-up shoes or barefoot. In poor Mexico shoes are a big expensive thing!

Hortensia and I devised a plan to have a few kids from a very poor Barrio get the chance to choose a pair of new shoos for themselves, and without their mothers telling them what to choose.

A lady was to collect a few needy children from Barrio Las Carretas and they were to meet us along the roadway.

So here she comes, an hour late, with about thirty kids! Now I had planned for what was good for my pocket-book and what my SUV would hold, about ten. Not thirty. I didn't have a bus and my pocket was not lined with Fort Knox gold.

I had planned to take them to a real shoe store in center city Tijuana.

First I had them all sit in a line along the curb, and each was to roll a special dice I made, with one red side. Roll red, and your in! After getting thirteen that rolled red, we were walking up the street when, Praise The Lord! We found a shoe store right there with a good selection of shoes, good prices and many were on sale! WOW!

Happy made the day!

The kids were having a blast trying on their new shoes, dirty feet and all. Many had a hard time making a selection.

The manager was happy too as he sold more shoes that day that he would the whole week! 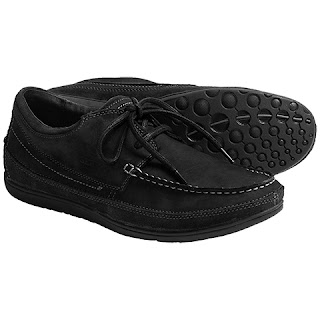 It's hot as it should be in August, far from cold and gray December. Odd that this story should come to mind. It's a story, like many, that tends to stick in my mind... and heart.

It was getting cold as the sun left the muddy valley of lower Trinchi and we were still giving out toys to a small line of cold kids, some clad in short sleeve shirts and others barefooted. Little six year old Tonio was so happy with his pair of black shoes. We gave them to him as his Christmas gift from our bus full of blankets, toys and odds ‘n ends of clothing. Each child could choose only one gift, he chose a pair of nearly new shoes.. He quickly ran down the road and climbed up the tire steps to his house holding tightly to his pair of black shoes.

Two days later Tonio was crushed to death in a mudslide. No one heard a word..

His house was in a neighborhood located on the hillside of a muddy valley, Barrio Invasion is what they call it. Like many neighborhoods we serve, it consists of poor "invaders" or homesteaders. The poorest of these families often dig out a shelf on a hillside and put up a shelter accessible by steps of old embedded tires. It doesn't take much to trigger an avalanche of mud after several days of rain. Mud is quiet. Mud is heavy. Mud is deadly. His family escaped, Tonio was in a little hut near the house ... he didn't make it.

I remember there were only five at Tonio's funeral. The little boy lay in a small open particle board casket. The family was poor so the mortuary did very little to clean up the boy where he laid swollen and bruised. With him in his casket were the two little black shoes he loved so dearly.

That same morning a few miles away, ten year old Laura and her fifteen year old sister Erma were playing together in their small makeshift bedroom. Without warning, their lives were snuffed out by another mudslide. No one heard a word, the quiet death. Hortensia, two of their little girl friends, and I walked a muddy road and through the trashy area to the site. I lifted the yellow caution ribbon and walked closer to the mudslide. The soldiers had scattered the families clothing and thrown the furniture away in hope that they would not return there again to live. Any thing of value was stolen and they had nothing but their two dead daughters. I remember the Governor was there with the media and he expressed his condolences, but unfortunately the government hasn't the resources to be of much help. The little family can't go back ... They can't go forward. They call on us.

Thanks for enabling us to step in where people like these fall through the cracks of bureaucratic greed and incompetence. This family needed help not promises. Hortensia represented us to both families and we helped pay for their funerals and food. Do the poor respect us? What do you think? Our challenge is that the word gets around.

Thanks to whoever donated them to us.

Missionaries are what we are and ministry is what we do. Doing the Word can be spelled in so many ways.
Posted by Pastor Von at 8:00 PM