Street kids grow up, at least most do. They become adults making a bare parasitic existence living as an addict on the wrong side of right. In many ways it would be easy to type them. With few exceptions they end up in one of four dead ends. Killed. Jail or prison. Rehabs; houses of rehabilitation or street beggars. These men and women will couple and breed creating more dysfunctional “families.”

Remember the vast majority of street kids are born of dysfunctional families.

In the eyes of many these people are social trash!

If I read my Scripture right, In the eyes of God the man pictured above is loved and redeemable! He has a value. He’s above and apart from the trash he’s embedded in. This man is the one Jesus loved and died for. Yet, he is lost and confused! Unloved.

How would the Believers in your church react to this worthless man reaching out to be loved?

Maybe we could rephrase the question. How Christian is your Church?
Posted by Pastor Von at 12:00 PM 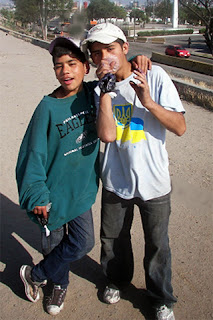 Last night I went where I shouldn't have gone.

I searched out YouTube ... Subject: Street Kids ... I should have known better. I've worked with street-kids for a half a century, plenty of them, right here in Tijuana. I've watched them in other countries as well. Why look at more?

I looked at street kids in India. Street kids in Brazil. Street kids in the Philippines and Mexico City. These worthless little imps are everywhere. Millions of them in this world. They are like leeches or fleas on sick urban societies.

Cops hate them because they are little thieves causing trouble wherever they nest and they will become the criminals of tomorrow. 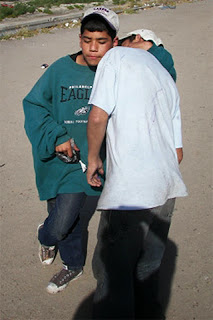 Most of these kids have run from a "home" of sorts, tired of the constant fighting and abuse inside their shelter, they run, sometimes toddle to the hell awaiting them in the streets, where they find their own kind and integrate .. worthless dirty little two legged rodent's invading the streets of big cities.

One by one the kids realize they are worthless and unwanted. Being unloved mixes them into a different human chemistry, indeed social misfits.

I remember visiting a city in Brazil and where I was staying, word came of a mass grave that was discovered near us. The bodies of eleven kids, with their arms wired together were laying in their grave, each kid had been shot in back of the head. Professional exterminators. Problem solved.

In that city there was an understanding of how to deal with problem kids in your neighborhood. Call a privet phone number ... negotiate a cash deal. Late at night a black van with a few off duty police would cruse the neighborhood and collect and dispose of the "problem" kids.

Looking at little kids sucking on plastic bags with some rubber cement inside ... or a couple of sprays from a can of spray paint. Eyes that once were looking at you take on a glassy stare, eyelids slowly drop as they enter a peaceful, restful world. I've seen it and it hurts. A four year old or five year old huffing, hurts bad!

Why do I look at even more of what I've already seen? It builds frustration and anger in me that combine to develop an energy that drives me on, to do more. 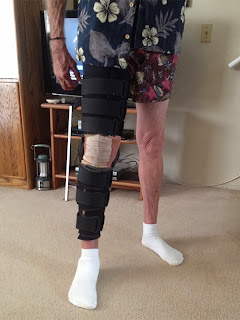 I've heard the term used and I thought I knew what this weird relationship was, I've even used the term before. . . . . but I have to admit I've never had a love, hate experience with anyone or anything.

Now, day by day I'm being enlightened and starting to understand this "Love Hate" thing.

The evening of Friday the 13th. (Sept.) I was married to this big long black brace! I'm married to a big thing! The marriage was performed while I was happily unconscious. When I regained my awareness I found this brace clutching my right leg. Little by little I'm started to develop a hate for this new addition to my life. It's a thing. It's lifeless. We can't co-exist but yet we have to.

I sense my marriage is crumbling pretty early!

They obviously planned for a long marriage because it's on to stay ... thanks to the Velcro factor. And if anything can hold this relationship together it's Velcro!

The truth is, I need my big black brace to stand up and to walk around stiff legged. I'm afraid to be without it ... it's begging to become a part of me, but how I hate it.

Oh boy, nothing worse; house arrest with a "lady" I love and can't get along without ... yet hate with a passion.

HE BLEW THE MAN AWAY 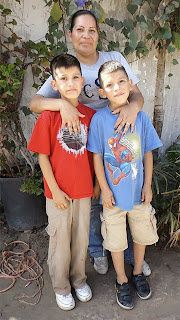 These two young boys and their mom have seen too much! A few days ago this little three-some found themselves in real need.

Mom and the two boys lived with their grandfather in his small house. It was evening when a drugged "malandro" (teen rogue) burst in their door. The two boys were on the couch watching TV when their grandfather came into the room with his shotgun. Words were exchanged, and grampa shot the malandro dead, right in the room. The young man was blasted dead, blood all over.

The two boys saw it all! They are still traumatized. The police came that night and put the grandfather in jail. After sorting it out the police released him to go home.

No one is living in the house now. Grandfather is on the run, disappeared.

Vengeance. The malandro's friends and family are looking for the old man. Tijuana justice will be done.

Mom and her two sons are in a bad way. That's why they have come to us for help. Please pray for these two boys.
Posted by Pastor Von at 7:00 PM