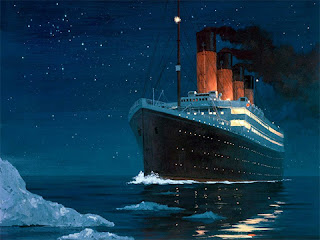 I've been thinking of the Titanic lately. A long ago tragedy. Where everyone aboard thought their ship, the Titanic, was invincible, after all it was the biggest and best ship in the world.

The last voyage. The proud Captain wouldn't listen to the warnings of the disaster ahead. He took no corrective action. A fatal indecision! (The Captain ordered the turn to avoid collision 15 seconds before colliding.) Too late.

Lessons we must learn.

The very rich went down with the poor.

The good went down with the bad.

The strong went down with the weak.

The innocent went down with the guilty.

The celebrities went down with the nobodies.

Only a pathetic few were saved.
Posted by Pastor Von at 6:00 PM 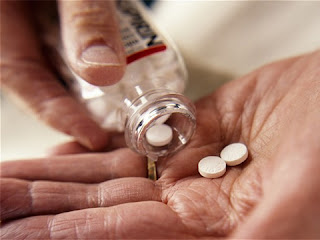 I've heard this term since I've been a child. I think I heard it first on radio. This pill, that ointment will quickly bring relief to our symptoms ... headache, sinus congestion, burning, itching, whatever.  Ah, "symptomatic-relief."

It seems we in America have become obsessed with relieving our "symptoms".  Pharmacies and drug stores continue to add "over-the-counter" medicines so we can deal with "symptoms." Now for cures or solutions we are told to go to the Doctor. To the M.D. to get an RX.

Politicians are elected to deal with social problems by finding solutions or cures ... but politicians, being what they are, would rather deal with easy, cheap and politically correct, "symptoms" than difficult and costly "Solutions." Laws are written and re-written dealing with our social ills. Politicians will consistently kick the problem down the road (A game we kids called "Kick-The-Can".) It seems today no one will dare define the real problems, consequently no solution is offered ... back to "symptomatic relief" from a cheap sugar coated bill.

It's plain to see that Uncle Sam is old and sick. The America that was, has noticeably declined. Biblical influence has declined radically; character and moral ethics have followed resulting in a stinking immoral cesspool of problems. The Church as a whole is diluted and many are deluded.

The symptoms of immorality, anger, hate, violence keep building. Lets face it our "Symptomatic-relief-pills" aren't working any more, and because Christ is the solution, the political price is too high ... much too costly. Christ, God and the Bible form a trinity that is the sure cure, but not politically acceptable ... on to the search for more sugar coated pills to alleviate the ugly pain of our diseased society.
Posted by Pastor Von at 12:00 PM 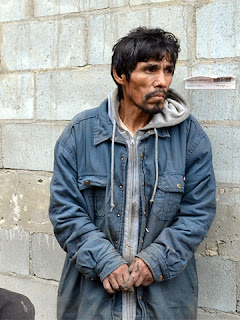 Drugs permeate my world. When my people can't take it anymore, They don't turn to the Lord, they turn to drugs. How I hate Satan and his drugs. Drugs can take a man down so fast. Drugs can change a loving mother to a full on selfish greedy user.

Lupe used to be one of the kids I counted on, he was a dedicated Christian and bilingual. What potential. He was accepted by the street kids which gave me an in to the gangs ... the "malandros" or (wild) feral teens. Those were days I saw a lot, I learned a lot.

Since my time with Lupe, I've learned a lot. First fact, you can't trust a user. Mother's, Father's, teens using drugs will do anything and say anything to get your favor and your money. We have an alcoholic mother with three sweet kids, we can't give her money for her kids ... she will use it! With a drug user, and alcohol is a drug, drugs come first, your children come second. She will drink the money up and worry about the kids later.

Years ago, on a cold Christmas Eve, we planned on giving the children of one poor family several nice new warm blankets, before we entered the shack several neighbors took us aside and explained that we had better use caution, Father was a user and would probably sell the blankets to get drugs. He had his three older girls out prostituting for his drug habit. We gave the kids their blankets but we first cut the blankets up so they wouldn't be sale-able. And walked out of their little house of hell. To this day it's a house of hell !

A user lives day and night in a dark hole of guilt and shame controlled by an addictive substance ... the bottle, pills, syringe, spray paint, or glue bag of fumes.. Drugs, Satan's made to order elixir, indeed a high; but a very temporary high followed by a permanent low. Under the influence you happily slip your hands into Satan's hand-cuffs. You are no longer your own.
Posted by Pastor Von at 8:00 PM 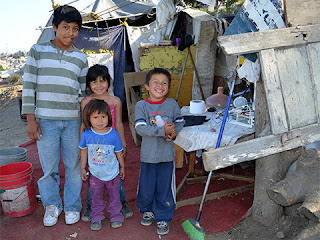 Hortensia has two gifts, one is easy conversation and the other; a gift for sensing poverty. Yesterday she spotted a family outside the big CaliMax market selling old bananas and tomatoes. They bought them at the big fruit market for a very low price and taxied them to this location to sell. The over ripe items, they sold very cheap, but made very small profit considering paying for the taxi.

She began talking with the mother and father. It seems they had come up to Tijuana from south Mexico to find a better life. Their three children crossed the street to meet Hortensia. Mom and Hortensia continued with the conversation ... it seems the family had put up their little shack on some vacant property along with sixteen other families. We would call it homesteading. This worked O. K for a few weeks. BUT ... the situation got bad.

The owners of the property came and gave them all two days to pack up and leave ... then they put up a barbed wire fence around the property. Everything, everyone, out.

Two big problems, they had no place to go, no relatives in Tijuana also they have to move by taxi ... see the photos. 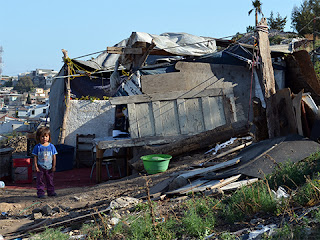 The next day we would be working in Barrio Invasion. So Hortensia invited the family to join us in the big barrio day, and even helped find them a new location where they will reassemble their shack ... and gave them a little of your money to get them started again. Just another, honestly hurting family.

Father is grateful yet he has his pride, he really doesn't like to be given charity!

We will follow up on them to see how we can help.
Posted by Pastor Von at 5:00 PM