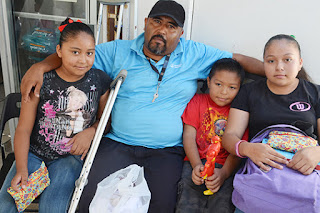 Generally when a man comes to us for help he’s a drug addict or "desperate". Thankfully Jose didn’t take his own life: a friend talked him out of it and suggested he talk with us.

His first big blow was his wife leaving him and their kids, while she pursued her romance with her girlfriend.

His wife’s new relationship was a tough blow to a macho Mexican man. Part of his job at the restaurant was delivering take-out food on a motorcycle.

A month ago while delivering food he was hit by a truck and his leg crushed. No job, only a Social Security pension of $20 a week.

He’s been asked to leave the two rooms in which they live because he hasn’t paid the rent. School uniforms and school shoes are out of the question.

His Doctor says he can go back to work in two weeks. Until then can we help this fragile little family of four? What would Jesus do?
Posted by Pastor Von at 1:00 PM